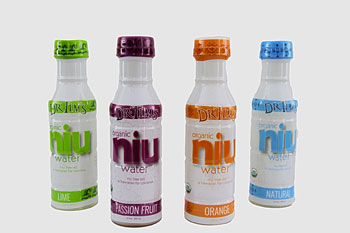 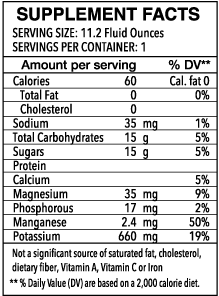 Restoration of all 5 essential electrolytes

Only 60 calories per serving

Half the sugar of the competition & No High Fructose Corn Syrup

Discovery on the Amazon

During a botanical expedition on a distant tributary off the Amazon River while in search of Acai berries I found that I was succumbing quickly to the effects of dehydration.  The temperature was 100 degrees Fahrenheit and the humidity was nearly the same and I was sweating like a gringo.  I had all the symptoms: increased thirst, dry mouth, staring to feel a little dizzy and weak, and although I did not faint I was feeling sluggish and a bit confused.   I had been drinking all the bottled water I could get my hands on but to my surprise I was not recovering.

As we sat single file in the canoe finally my native Brazilian guide noticed that I was struggling a bit so he tapped me on the shoulder, handed me a bottle with clear liquid and urged me to drink it.  It was coconut water.   Up until that point I had always considered the tourist “straw in a coconut” as a novelty drink.  However, I was assured by my friends that I needed to drink this to help my condition and reverse the symptoms of dehydration including my unquenchable thirst.

The taste was not what I had expected.  It was heavy and tasted raw, a little salty with a very smooth mouth feel and a faintly sweet sense about it.   Soon after finishing one bottle of this coconut water my thirst resolved, my sweating slowed to a more normal pace and I regained my focus.

I was impressed with the remarkable physiological results which were real and tangible from the coconut water.  I knew I needed to get back to my lab and work on improving the flavor and making it lighter and easier to drink.  After months of working on different formulations and testing with sports teams in our dry arid desert I arrived at the perfect formulation.  Dr. Tim’s Organic NIU Water drink is a coconut water that is  an all-natural complete hydration drink with naturally occurring organic electrolytes and half the sugar of existing sports drinks.  Best of all it tastes great and is not heavy in the stomach.

Coconut water is a natural occurring source of electrolytes that has the same basic chemical makeup of our blood.  It is a well-known fact that during WWII in the pacific theater shortages of human plasma were common.  While battle field transfusions were useful it was not always convenient.  It was determined that the water found in young coconuts had the same osmolality as our blood.  In other words it had the same chemical and electrolyte balance and the water inside a whole coconut was sterile.  There are reports of coconuts being used to replace loss of blood volume and electrolytes via IV infusion.  To this day coconuts are still used this way in remote areas of the world where blood products are not in supply and coconuts are.

In 2010, an article in Time magazine pointed out that coconut water “contains the same five electrolytes found in human blood (Gatorade has only two).” It’s the best and easiest way to get fluid into your system, and they are naturally occurring electrolytes.  The problem is that most coconut water doesn’t taste good and is too heavy in the stomach.

The challenge with coconut water is that it sits heavy in the stomach.  We found that while many people want to drink coconut water they do not like the taste and do not want the calories or the heaviness.   Dr. Tim’s Organic Coconut Water solves all of these issues and is certified organic.